Home Latest Forex News EUR/USD. Rallies and protests in the US hurt Donald Trump's ratings. The... 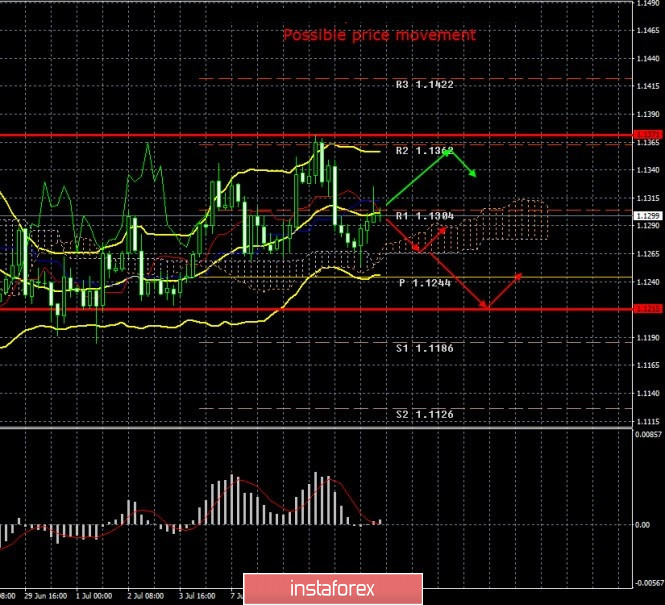 Over the past week, the EUR/USD currency pair has been trading in a “swing” mode with a minimal advantage of the European currency. At the same time, the side channel that we discussed in recent articles (1.1200-1.1350) also remained in force. In the final part of the week, the pair attempted to overcome the upper line of this channel, however, it failed. Thus, we can only state the facts. Traders continue to put pressure on the US currency. The list of possible causes is huge. There are mass protests and rallies because of a racist scandal, and the deterioration of relations with China, which threatens to only increase over time, and the epidemic of “coronavirus”, which does not subside in the United States. These are only the most obvious and not even economic reasons. But in terms of the economy in the United States now as well as everywhere. The “coronavirus crisis” has hit all major players on the world stage in the same way, with the exception of China, which recovered fairly quickly from the pandemic and quickly managed to localize the spread of infection. And this is the point that raises the most questions. Both Donald Trump and other world leaders have repeatedly accused China of hiding information. This applies to the COVID-2019 virus itself, and the scale of losses among Chinese citizens. Thus, if China’s losses are really only a few thousand people, and the total number of cases of infection does not exceed 100 thousand, then there is a reasonable question, how is it that there are so few recorded cases of infection and deaths in China, which was the source of COVID distribution? In countries with much smaller populations, there are many times more cases and deaths from the virus. Therefore, either China is really hiding the real numbers, or China was ready for the spread of the virus, quickly localized it so that the world community did not have questions, and now is fully restoring its own economy at a time when the EU has just recovered from the epidemic, and the United States did not recover at all.

Meanwhile, we return again and again to the figure of Donald Trump and the future US elections. At this time, let’s not be afraid of this word, the world’s peace for the coming years depends on this issue. And here we would like to elaborate on the topic of protests against the background of a racist scandal in America. Let’s be honest. There are about 7 billion people in the world. People die constantly, this is a normal phenomenon for the planet Earth. How many people die from the actions of criminal forces, from natural disasters, from catastrophes of various plans and scales, from diseases? Now let’s try to remember and analyze. Do you remember at least one rally against tobacco smoking, which claims millions of lives every year? Or against drugs? Or against alcohol? Or against AIDS? Or against crime? Or against the wars that are being waged even in the 21st century? Well, perhaps these examples are not too comparable to what happened a month and a half ago in a small American town, where a white police officer strangled a black man with his knee. But from our point of view, this happens all the time. Injustice, unfair deaths, unfair sacrifices. The fact that the murder of a black man has kept America up for a month now leaves as many unanswered questions as the topic of “coronavirus” in China. The capital truth says, “look for who benefits”. And now, after a month of rallies and protests, this is a really important question, and who benefits from all these rallies and protests? They are unlikely to benefit Donald Trump himself. Accordingly, they are beneficial to Trump’s opponents. As in the case of the “Chinese virus”, we do not blame Joe Biden or China itself or any other opponents of the American President for what has been happening in the United States in the past six weeks (this requires proof, unless, of course, you are not Donald Trump). We fully assume that the American population simply could not stand the epidemic and the crisis caused by it, and the murder of George Floyd was, as they say, the last straw. Plus, many experts recognize that the problem of racism in the United States has always been and continues to this day. Thus, in difficult times for the country, the murder of Floyd could be the match that was put to the pool of spilled gasoline. However, the time period during which the rallies continue is surprising. How much longer are the Americans going to hold them? It seems that all the protests are fueled by someone from outside. And the goal of this “someone” is one – to continue to put pressure on Donald Trump’s political ratings. The fact is that the US President from the very beginning of mass protests showed himself once again not from the most attractive side. First, the American President himself was accused of racism. Secondly, Trump wanted to resort to suppressing rallies with the help of the US army, which has never happened in the history of the country (referring to the law of the early 19th century, which was never applied). Third, Trump did not forget to declare this in public, which immediately turned all the protesters against him, because under US law, rallies are not prohibited, popular riots and uprisings are prohibited. And most of the meetings were held calmly and without pogroms and other offenses. However, Trump did not need the rallies from the very beginning, so he wanted to suppress them as quickly as possible and by any means available. Anyway, for Trump, rallies are an additional headache. As most political scientists note, in the end, US citizens will assign responsibility for what is happening to the current government. Just like the responsibility for the crisis, for unemployment, for the epidemic. Thus, the political reputation and trust of the population in the President suffered very much in 2020.

Well, for the US dollar, which, in principle, is still afloat, all this is bad news. It is clear that investors and traders primarily pay attention to economic news, not to protests. However, the economy is also far from being in a better state. And people in America are now busy with riots and protests, not working and rebuilding the economy after a crisis that is not even over. As we have said many times, the US dollar continues to lose its long-term attractiveness compared to the euro.

On the 4-hour timeframe, the euro/dollar pair retains the prospects of a weak upward movement, however, we do not recommend opening long positions until the level of 1.1350 is successfully overcome. The same applies to sell orders. If traders manage to lower the pair under the Ichimoku cloud, then the shorts will formally become relevant, with the goals of 1.1215 and 1.1186. However, near the 1.1200 level, the lower border of the assumed side channel lies.