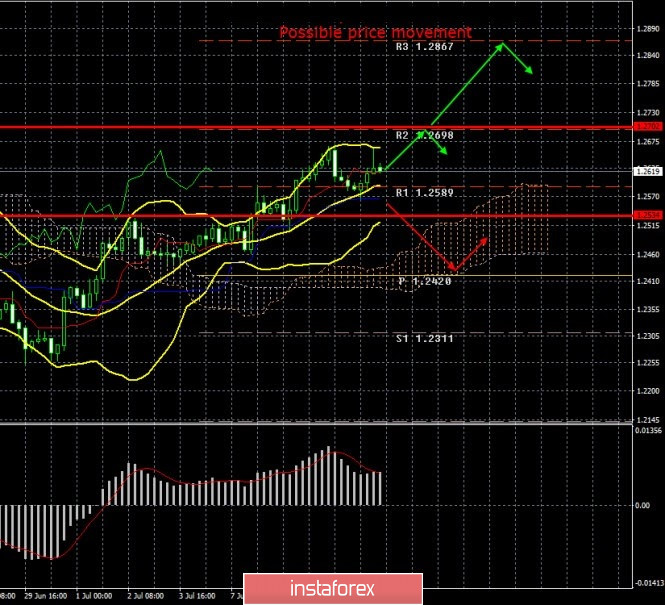 Last week, the British pound traded very confidently in an upward direction. Market participants bought the British pound quite zealously, despite the next failed negotiations between Brussels and London, which significantly reduces the likelihood of signing an agreement between the parties. Although both sides understand that they will suffer losses without a free trade agreement, only representatives of the European Union state this publicly. It is the representatives of the ECB, the European Commission and the European Parliament who clearly understand that “no deal – no good trade”. However, the Europeans also emphasize that it is the British who will suffer the most losses. But Boris Johnson and his entourage are silent on this issue and only continue to repeat, like a mantra, that they agree to a new agreement and trade under the rules of the WTO, starting in 2021. The most interesting thing is that this is true. The “top” of the Kingdom seems to really agree to this or is simply bluffing. In one of the articles last week, we have already raised this question. Boris Johnson simply doesn’t care that the British economy will suffer even more from the lack of a deal with the EU. Initially, the British Prime Minister was aimed at ending all ties with the EU at any cost. And he continues on his way to his goal. Well, the budget deficit and the weakness of the economy will cover British taxes and their labor. However, even though the fundamental background in the Foggy Albion has hardly changed in the past four years, we believe that now the pound is in some kind of “star hour”. The fact is that for the first time in a long time in America, everything is so bad that many investors and traders refuse to buy the dollar. There are so many uncertainties in the future of the country that the US currency no longer looks like the number one currency that everyone buys as soon as the situation in the world or any of its regions heats up. Because right now the situation is heating up in America.

In the article on EUR/USD, we started to look at the overall picture of the situation in America. There is such a large number of events happening in the United States that it will take several articles to at least try to understand this issue completely. In an article on the euro/dollar, we examined such a problem of the American President as mass rallies and protests that have not stopped in the country for more than a month, and also questioned the “nature” of these riots. However, rallies and protests are far from Trump’s only headache right now. Just a month ago, Trump’s former national security adviser, John Bolton, published the book “The Room in which Everything Happened: Memoirs from the White House”. This book is about the work of Bolton himself in the White House, as well as about various processes taking place in the highest echelons of power. It affects the current president of the United States. Moreover, it is very unpleasant. According to some experts, John Bolton started this “anti-trump campaign” with selfish goals. Or to avenge the president, since he fired him at the end of 2019. We believe that Bolton, like all rallies and protests, may have more serious and powerful forces behind it. The same question that we asked in the previous article. The White House, like any other government, regularly fires officials. How many of them write and publish books that expose the current president in an unpleasant light a few months before the presidential election? It is obvious that Bolton wants to annoy Trump, or he was asked to do it, asked very politely and very insistently. But, as we have said repeatedly, this does not mean that Trump is right in all his undertakings, statements, and actions. Rather, the opposite. With his political mistakes, his way of negotiating in the international arena, spoiling relations with everyone, and not allowing the opposite opinion to exist, Trump has turned half of America and half of the world against him. Thus, now it is not surprising that everyone who “offended” Trump, paid him back. “The President does not have any ideological support or strategy,” said the former adviser to the President. He does not know the difference between the national interests of the United States and the interests of Donald Trump. It is not clear where the national interests are and where his interests are, and this is very dangerous for our country.” “When he took office as President, he knew very little about the structure of public administration and in the future showed no interest in studying it. Over the past hundred years, there has not been a single President with such an approach to his work,” John Bolton added, commenting on the level of competence of the US President. “In 2016, when choosing between Trump and Hillary Clinton, I gave preference to Trump. Now that I’ve seen what this President is like, I can’t vote for him. I care about the fate of our country, and he does not represent the cause of the Republicans, which I seek to support,” Bolton concluded. Bolton also explained that his book comes out a few months before the election is not accidental. “It is better to tell this story now so that the American people can look at it and make the right decision in the election,” Bolton said. In his book, Bolton detailed many different stories related to the incompetence of Donald Trump, compared him with other world leaders, concluding that Trump is almost the worst President in the history of the United States. They also touched on the topic of impeachment of Trump, the case of military assistance to Ukraine, the case of pressure on the Ukrainian President because of the investigation of Joe Biden. Trump himself commented on Bolton’s book: “Any conversations with me, as President, I consider a state secret. This means that if he wrote a book, and this book is published, he will break the law. And he will have criminal problems.” At the same time, experts believe that it will not be possible to bring Bolton to criminal responsibility. A person who has worked in the White House knows what to write in a memoir and what not to write. He does not quote any conversations or documents, only expresses his vision of the situation and comments on the individual actions of the President. But for Trump himself, the reaction of Americans to this book will be of great importance. After all, Americans are the electorate of Trump, so their opinion about everything that Bolton wrote, and what has already got into the press and media, is huge.

In the 4-hour timeframe, the pound/dollar pair has slightly corrected and may resume its upward movement. Thus, it is now recommended to consider long positions with targets of 1.2698 and 1.2876. It is recommended to return to sell orders not before traders have reached the Ichimoku cloud, but this development is not expected in the near future.