Home Latest Forex News EUR/USD. The creation of a vaccine against the "coronavirus" in America could... 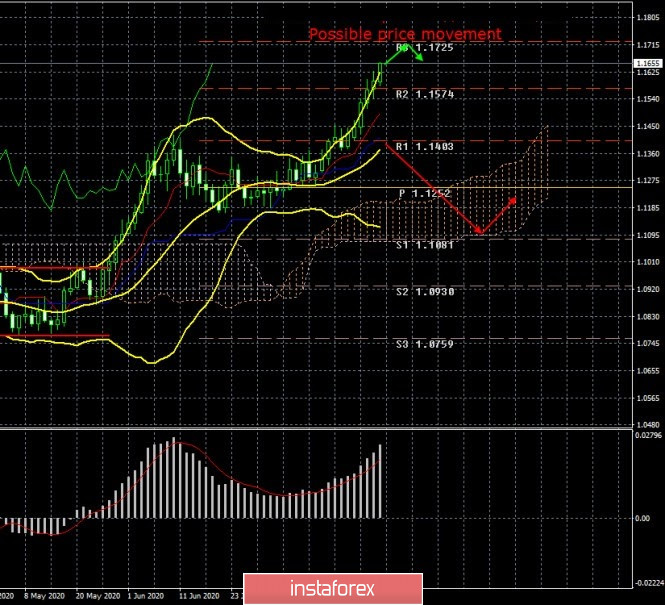 Sometimes it is very useful to look at the daily chart of the pair’s movement to understand what is happening to the instrument in the long term. And in the case of the European currency, everything becomes obvious. By and large, the upward trend began on May 7 after the markets recovered a little from the March and April shocks. Since then, the European currency has continued to appreciate and has already exceeded the highs of 2019 and 2020. That is, at this time, the euro currency is as expensive as possible over the past two years. We have repeatedly asked the question, what caused such a serious growth of the euro currency, given the fact that the European economy and the American one suffered approximately the same from the first “wave” of the epidemic, and according to experts, even the European one suffered more? It should also take into account the fact that even if the Fed cuts rates to the minimum level of 0.25%, they still remain higher than in the European Union. That is, what do we have in the dry balance? Monetary policy in the US remains more hawkish, and the economy is stronger. But at the same time, the euro currency is growing, despite the fact that there is no particularly positive news from the European Union. It is growing so that it updates two-year highs. In this case, you have to look at the situation as if from the outside and try to grasp all the factors. By the way, it should be said that the current situation in the currency market is very much satisfied with US President Donald Trump. Recall that from the very beginning of his presidential term, Trump dreamed of a “cheap” dollar. However, it was not possible to work in pairs with the Fed, so the dollar has basically continued to grow all this time (the last two years). What is happening now is great for America with its 26 trillion national debt. However, the dollar exchange rate on the international currency market does not depend on Trump. It depends at this time solely on the crises in which the United States have plunged. Social, economic, political, and epidemiological. We have covered all these crises in detail, and today we will focus in more detail on the political and prospects for Trump’s re-election.

Many experts and analysts have already buried the possibility of Trump winning the election again. And not without good reason. However, there are some experts who believe that the chances of Trump are not completely lost. First, the election is still three months away, and second, many have doubts about whether 77-year-old Joseph Biden will be able to lead the country adequately, and third, Trump is openly expected to play foul in the election. The sensitivity of the situation with Trump’s political ratings is that the current US President is not to blame for the pandemic. Blame China, which accidentally or intentionally allowed the virus to spread around the world. Trump can only be blamed for the fact that his administration did not take the COVID-2019 virus seriously, which led to a huge number of diseases and deaths. But don’t forget that 329 million people live in America. Therefore, in part, Trump is even right when he says that the incidence rates in the United States are not the highest in the world. If we take the percentage ratio between the number of cases and the number of the population, this is true. Plus, we should also not forget that the United States does conduct a lot of tests for “coronavirus”. It is unlikely that, relatively speaking, the same Brazil or India, with their 2.3 and 1.3 million cases, has the same number of tests as in the United States. Thus, most likely, the first place in the world in terms of the number of diseases is not really the United States. Nevertheless, the Americans blame Trump for the fact that the “coronavirus” has spread to America. And not without good reason. And at the same time it is blamed for the economic crisis, because this is normal common logic. If Trump boasted for 3 years that the country is at its economic peak and this is his merit, then the current levels of recession and unemployment are also his “merit”. Most importantly, states that traditionally vote for the Republicans or have supported Trump from the very beginning have the highest number of infections, which naturally cannot but affect the electoral mood of Americans. Trump is also losing support in the so-called “disputed” states, where the margin of one of the candidates is minimal in each election. According to the latest opinion polls, Joe Biden confidently holds the gap from Trump by 8-10% over the past 2-3 months. Statistics show that with this advantage three months before the election, only one candidate has not ended up as President since 1980.

According to many experts, it is because of the “coronavirus” and the second “wave” of the epidemic in the United States that Trump lost most of his ratings. However, it is “coronavirus” that can become his main trump card in the fight against Biden. If American scientists manage to develop a vaccine before November 3, this achievement will also go into the piggy bank of the current president. He will be able to claim that it is because of his high attention to the pandemic that the country has invested heavily in developing a vaccine, so that now Americans have a cure, while other countries may not have one. And there is no doubt that in this case, for most Americans, Trump will immediately turn from an “anti-hero” to a “hero”, and his political ratings will definitely grow. Also, many experts note that the ratio of tramp to the “coronavirus” has changed in recent years. Simply put, the US president has chosen a different strategy for dealing with the epidemic. If earlier Trump refused to wear a mask, called the virus a “runny nose” and claimed that it would not cause significant harm to America, now the mask is regularly present on Trump’s face, he says that “the disease is very serious and the situation in the country may deteriorate”, and also canceled several conventions of his party and election rallies, although a couple of weeks ago he held them. Also, Trump began to “set an example for Americans”, which was missing from the very beginning of the epidemic. This was reported by the American president himself, which immediately shocked half of America. Although such changes in Trump’s rhetoric are absolutely not new. The majority has long been accustomed to the fact that the US leader adheres to the principle “My word – I want to give it, I want to take it back”.

For the US currency, re-election or not re-election of Trump is a matter of long-term perspective. But creating a vaccine or reducing disease rates are pressing issues that can greatly help the dollar. So far, there is no question of a positive solution to these issues, so the dollar may continue to fall in price.

On a 24-hour timeframe, the euro/dollar pair is moving steadily up, the bulls are extremely strong, and the bears are absent from the market. Therefore, buy orders with the target resistance level of 1.1725 remain relevant in July. It is recommended to sell the pair for the long term not before fixing the price below the critical line with the first goal being the support level of 1.1081.