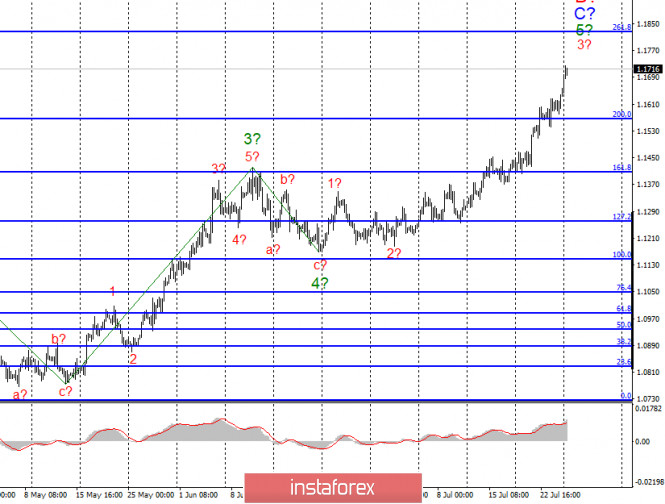 On July 24, the EUR/USD pair gained about 60 more pips, and another 70 on Monday morning. Thus, the rise in the instrument quotes as part of the construction of wave 3 to 5 in C to B continues, and the wave itself takes a very extended form. The current wave counting has not undergone any changes recently, since nothing in the nature of the instrument’s movement has changed. Even after the completion of the current wave, a small pullback and a resumption of the increase are expected, since another 5 in 5 in C in b wave should be built.

The Euro currency continues to be in high demand in the currency market. And it should thank America and the US dollar for this, the demand for which is extremely weak. Despite the discouraging rise in the European currency, which has happened infrequently in recent years, nothing surprising is now happening in the currency market. The situation with the coronavirus in the United States remains extremely difficult. During the entire previous week, 60-80 thousand new cases of the disease were recorded daily. These levels were held steadily, which led many doctors in America to sound the alarm and urge Congress to return the lockdown to the country. Let me remind you that from the very beginning of the pandemic in America, many health officials were very skeptical about the measures taken by Congress and the White House, considering them excessively weak and insufficient. And after Donald Trump decided to lift the strict quarantine, the situation only began to worsen, without having time to improve. As I said earlier, the state of the economy is important to the American president, not the health of the nation. Therefore, the current calls by doctors to return the quarantine, most likely, will go unnoticed by the White House. Meanwhile, the country’s chief epidemiologist, Anthony Fauci, continues to warn the government that with the epidemic growing at such a terrible rate, the entire country will soon fall ill. The strongest increase in those infected with the virus can simply bring down the entire health care system. There are not enough places in hospitals for all patients. And of course, one cannot fail to note the deterioration of relations between China and the United States, which have already begun to close consulates and representations in each other’s territories.

The euro/dollar pair presumably continues to build an upward wave C in B. Thus, I recommend buying the instrument with targets located near the estimated level of 1.1827, which equates to 261.8% Fibonacci, for each MACD “up” signal in the calculation to continue building wave 5 in C in B. 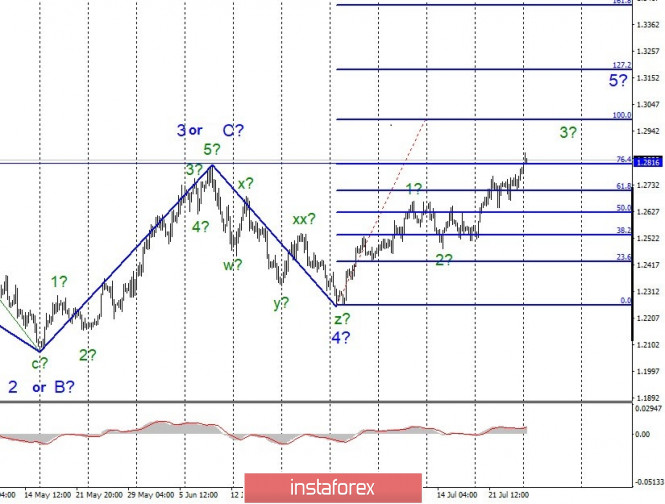 The GBP/USD pair gained about 50 pips at the end of the day on July 24 and thus, the construction of the expected wave 3 in 5 continues. A successful attempt to break through the 76.4% Fibonacci level, which is also the peak of wave 3 or C, indicates the markets are ready for further purchases of the European currency. The whole wave 5, on the other hand, can take on a rather extended form, but I expect a new downward trend section to be built after its completion.

Last Friday, there were indices of business activity in the areas of manufacturing and services in the UK. The first turned out to be significantly better than the forecast – 56.6 against 51.1, while the second is slightly better, 53.6 against 52. Nevertheless, both indices show that business activity is growing, and the areas of production and services have begun to recover, as evidenced by the values of the indices are above 50. Thus, the pound continues to rise in pair with the dollar; however, this is not based on economic reports, but on the difficult situation with the coronavirus in the United States and the worsening conflict between the United States and China.

The pound/dollar pair has complicated the current wave counting, which now suggests building an upward wave. Therefore, I recommend at this time to buy the instrument for each MACD signal “up” with targets located near the level of 1.2990, which equates to 100.0% Fibonacci.