Home Latest Forex News Analysis and trading signals for beginners. How to trade the EUR/USD pair...

Hourly chart of the EUR/USD pair 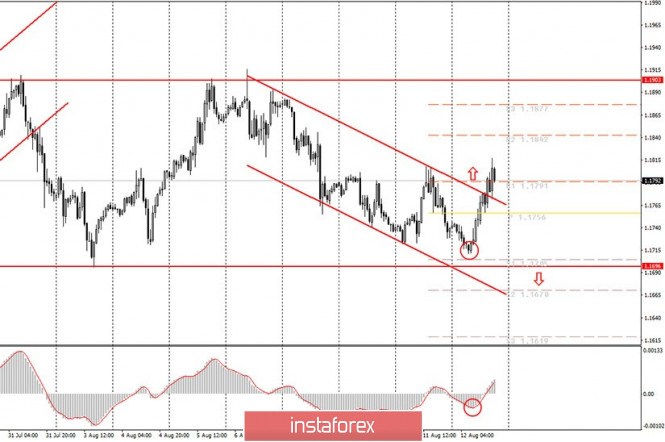 The EUR/USD pair moved up early in the morning and began, as it turned out later, a rather strong upward movement on Wednesday, August 12. At least, the strength of this movement was more than enough to exit the downward trend channel through its upper border. And this, in turn, indicates that sellers are not ready to continue to get rid of the euro currency. In fact, the upward reversal took place near the 1.1696 level, which we have repeatedly mentioned is important. Therefore, novice traders could close all short positions (sells) in the morning on the MACD up signal, as we recommended. As for further trading, consolidating above the channel makes it possible to consider buying the pair now, but not at the end of the day and not after a 100-point rise. In the current environment, it is better to resume trading after a correction.

Fundamentally, novice traders should have paid attention to two reports on Wednesday. The first is industrial production in the European Union, the second is inflation in the United States. Despite the fact that industrial production turned out to be worse than forecasted (that is, it should have caused an increase in the US dollar), and inflation – better than forecasted (that is, it should have again caused an increase in the US dollar), as we said even before all of the reports were released, the pair turned upward (growth of the euro currency) and was moving this way all day. Therefore, without any losses, novice traders could witness that traders do not always work out all macroeconomic data; the nature of macroeconomic data may not coincide with the direction in which the pair would move towards; all reports and news must be supported by specific technical signals. Today we have a situation in which the dollar was supposed to rise, but instead it fell all day. And technical analysis in the morning dismissed the option with its further growth. We remind you that the pair moving up indicates the euro’s growth, while its downward movement indicates the dollar’s growth.

August 13, Thursday, will be a little easier for novice traders, since important reports are not scheduled for that day. In Germany, the inflation report will be released, but this is just one country out of 27 members of the European Union. Thus, there is hardly any reaction. The same goes for the report on US unemployment claims. Therefore, only technical factors should influence the pair’s movement during the day. Of course, novice traders should not forget that the movement is also influenced by the fundamental background (more global topics that are of great importance for the country and the economy as a whole). For example, the coronavirus epidemic in the United States. In recent weeks, the virus has receded and fewer cases have been reported every day. However, nobody knows what will happen tomorrow.

The following scenarios are possible on August 13:

1) Purchases of the pair at this time suddenly became relevant, since the price was pinned above the descending channel. Thus, at this time, we advise novice traders to consider purchases with the goal of 1.1842. However, after the pair has already gone up about 100 points today, we do not recommend opening new deals. It is better to wait for a downward correction, and then the MACD signal before you buy and then start trading for an increase.

2) Sales of the currency pair have now become irrelevant, since the price has left the ascending channel. Also, the euro/dollar pair failed to gain a foothold below the 1.1696 level, which would significantly improve the mood of sellers. We also do not recommend selling the pair on the MACD signal down, since this signal will be clearly corrective in the current technical picture. Therefore, you need to wait for more favorable conditions to sell the pair.

What’s on the chart:

Support and Resistance Price Levels – Levels that are targets when buying or selling. You can place Take Profit levels near them.

Red lines – channels or trend lines that display the current trend and show which direction it is preferable to trade now.

Arrows up/down – indicate when you reach or overcome which obstacles you should trade up or down.

MACD indicator is a histogram and a signal line, the crossing of which is a signal to enter the market. It is recommended to use in combination with trend lines (channels, trend lines).

Important speeches and reports (always contained in the news calendar) can greatly influence the movement of a currency pair. Therefore, during their exit, it is recommended to trade as carefully as possible or exit the market in order to avoid a sharp price reversal against the previous movement.

Beginners in the forex market should remember that every trade cannot be profitable. The development of a clear strategy and money management are the key to success in trading over a long period of time.