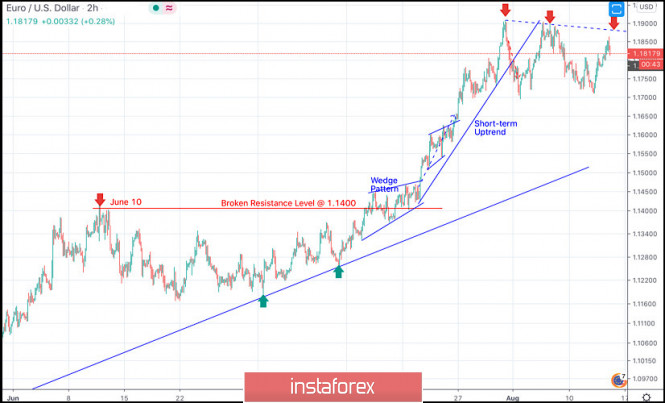 The EURUSD pair has been moving-up since the pair has initiated the depicted uptrend line on May 25.

On June 11, a major resistance level was formed around 1.1400 which prevented further upside movement for some time and forced the pair to have a downside pause.

Recently, the EURUSD demonstrated an ascending wedge around the mentioned price level of 1.1400.However, recent negative fundamental data from the U.S. have caused the EUR/USD to achieve another breakout to the upside.

By the end of last week, the EURUSD has been approaching the price levels around 1.1900 where signs of downside pressure were enhanced.

Intraday traders should be considering the recent breakdown of the depicted short-term uptrend line. A Breakdown below the price level of 1.1650 is going to give a better confirmation for a valid SELL Position. Estimated targets would be located around 1.1550, 1.1500 then 1.1450.

On the other hand, conservative traders should consider any bullish pullback to retest the newly-established downtrend line around 1.1850 for another SELL Position with a lower risk.